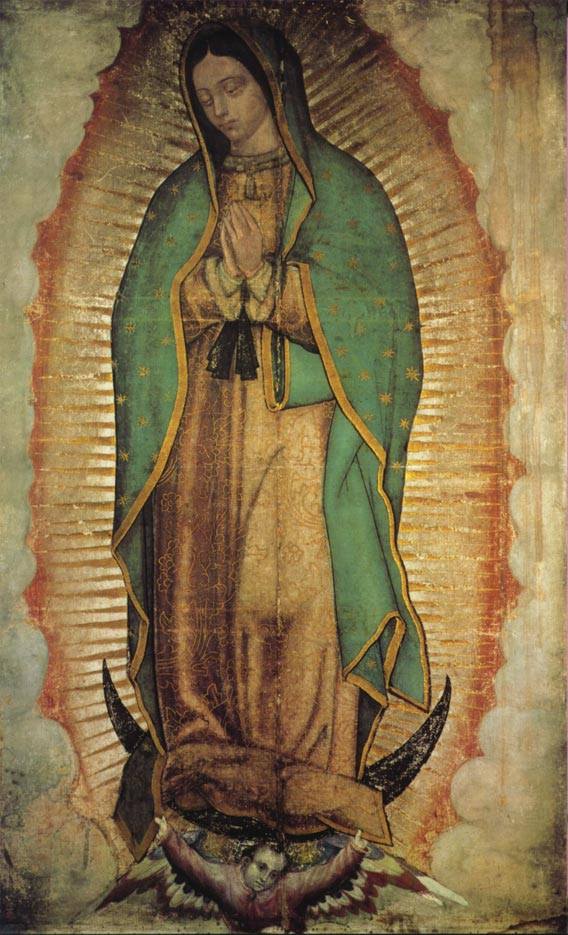 Our Lady of Guadalupe (Spanish: Nuestra Señora de Guadalupe), also known as the Virgin of Guadalupe (Spanish: Virgen de Guadalupe) is a title of the Virgin Mary associated with a celebrated pictorial image housed in the Basilica of Our Lady of Guadalupe in México City.
Official Catholic accounts state that on the morning of December 9, 1531 Juan Diego saw an apparition of a young girl at the Hill of Tepeyac, near Mexico City. Speaking to him in Nahuatl, the girl asked that a church be built at that site in her honor; from her words, Juan Diego recognized the girl as the Virgin Mary. Diego told his story to the Spanish Archbishop of Mexico City, Fray Juan de Zumárraga, who instructed him to return to Tepeyac Hill, and ask the “lady” for a miraculous sign to prove her identity. The first sign was the Virgin healing Juan’s uncle. The Virgin told Juan Diego to gather flowers from the top of Tepeyac Hill. Although December was very late in the growing season for flowers to bloom, Juan Diego found Castilian roses, not native to Mexico, on the normally barren hilltop. The Virgin arranged these in his peasant cloak or tilma. When Juan Diego opened his cloak before Bishop Zumárraga on December 12, the flowers fell to the floor, and on the fabric was the image of the Virgin of Guadalupe.
Juan Diego was canonised in 2002, and his tilma is displayed in the Basilica of Our Lady of Guadalupe, the most visited Marian shrine in the world. The representation of the Virgin on the tilma is Mexico’s most popular religious and cultural image, and under this title the Virgin has been acclaimed as “Queen of Mexico”, “Patroness of the Americas”, “Empress of Latin America”, and “Protectress of Unborn Children” (the latter three given by Pope John Paul II in 1999). Under this title, she was also proclaimed “Heavenly Patroness of the Philippines” in 1935, a designation revised by Pope Pius XII in 1942. http://en.wikipedia.org/wiki/Our_Lady_of_Guadalupe