They will present interesting data from their latest report regarding the Latino community in Illinois. Please share and join! Wednesday 9/10th 8:30AM at UIC. 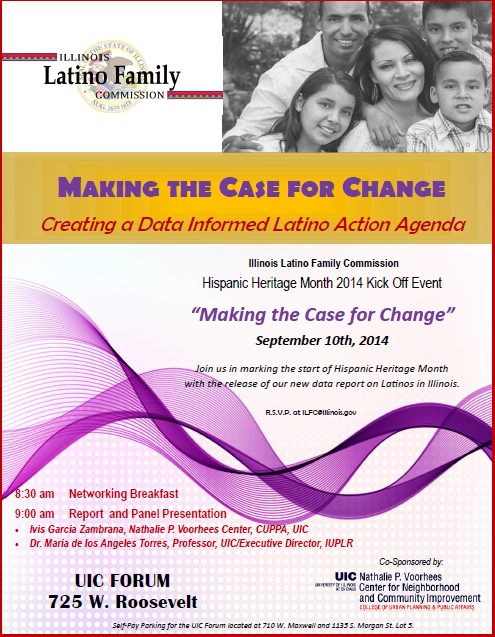 Ivis Garcia Zambrana is a PhD student in Urban Planning and Policy at UIC and a Research Assistant at the Voorhees Center. Before joining UIC’s PhD Program, she worked at various capacities as a planner. She holds dual master’s degrees from the University of New Mexico in Community and Regional Planning and Latin American Studies.

She is author of two books, The Lost Apple: Operation Pedro Pan, Cuban Children in the US and the Promise of a Better Future. Boston, Mass: Beacon Press, 2004 and In the Land of Mirrors: The Politics of Cuban Exiles in the United States. Ann Arbor, Michigan: University of Michigan Press, 1999. She edited By Heart/De Memoria: Cuban Women’s Journeys in and Out of Exile. Philadelphia: Temple University, 2002 and co-edited, Borderless Borders: Latinos, Latin American and the Paradoxes of Interdependence. Philadelphia, Penn.: Temple University Press, spring 1998. She has also published on issues of diversity, “Democracy and Diversity: Expanding Notions of Citizenship,” in David W. Engstrom and Lisette M. Piedra eds. Our Diverse Society, Washington DC, NASW Publishers, 2006. She is a frequent contributor in the Chicago Tribune and other newspapers.

Currently she is a co-Principal Investigator for Youth Politics in the Age of Globalization, funded by Chapin Hall and the Kellogg Foundation and was Co-Pi for a National Science Research Foundation Project: Civic Engagement in Three Latino Neighborhoods. She was a UIC CIC fellow 2006-2007 and is a member of the Provost’s Advisory Committee on Diversity.