Where will you Celebrate Cinco de Mayo? Try Dancing

Medically Reviewed by a Doctor on 1/26/2015
http://www.medicinenet.com/aerobic_exercise/page3.htm

On September 15, 1810, Father Miguel Hidalgo heard bad news, the Spanish were coming for him. On the morning of the 16th, Hidalgo took to the pulpit in the town of Dolores and made a shocking announcement: he was taking up arms against the tyrannies of the Spanish government and his parishioners were all invited to join him. His famous speech became known as “El Grito de Dolores,” Or the “Cry of Dolores.” Within hours Hidalgo had an army: a large, unruly, poorly armed but resolute mob. Hidalgo led his army towards Mexico City.

Along the way they laid siege to the town of Guanajuato and fought off the Spanish defense at the Battle of Monte de las Cruces. By November he was at the gates of the city itself, with an angry army large enough to take it. Yet Hidalgo inexplicably retreated.

In January of 1811, Hidalgo was routed at the Battle of Calderon Bridge by a much smaller but better-trained Spanish army. Forced to flee, the rebel leaders were soon captured. Hidalgo was put to death in June of 1811. The peasant army had disbanded and it looked as if Spain had reasserted control over its unruly colony.

But such was not the case. One of Hidalgo’s captains, José María Morelos, took up the banner of independence and fought until his own capture and execution in 1815. He was in turn succeeded by his own Lieutenant, Vicente Guerrero and rebel leader Guadalupe Victoria, who fought for six more years until 1821, when they reached an agreement with turncoat Royal Officer Agustín de Iturbide which allowed for Mexico’s definitive liberation in September of 1821.

Some people mistakenly believe that Cinco de Mayo is Mexico’s independence day. That’s not correct: Cinco de Mayo actually celebrates the unlikely Mexican victory over the French at the Battle of Puebla in 1862.- Contributed by The Warriors Running Group

El Grito is celebrated on September 15th in Mexico at 11:00pm before the Independence festivities officially begin at midnight.

Today also marks the beginning of Hispanic Heritage Month which is a month long celebration honoring Hispanic history, culture, roots and individuals who have helped shape this U.S.

Best night at Lalo’s on Maxwell sharing it with amazing baseball professionals and their love for the game. Go Chicago White Sox! Go Ámate Ahora! 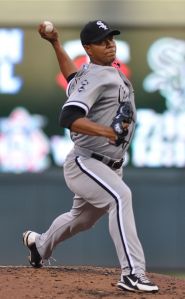